I'm pleased to be able to have Ellen Booraem on the blog today for an interview. Ellen is a fellow author and blogging buddy of mine, and she's here to talk about her book, TEXTING THE UNDERWORLD.

Hi, Ellen! Tell us a bit about yourself. 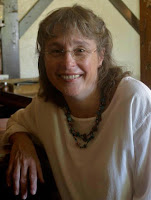 I’m on my fourth writing career. I started out doing college publications, then had three instructive years doing corporate newsletters. On to small-town journalism, which I did for nearly 20 years here in Maine, loving every minute. (Well, most minutes.) I quit my all-time favorite job to write my first book, and still can’t believe I did that. Glad I did, though!

I probably shouldn’t admit this, but I’ve made my living as a writer for 39 years. (Can’t believe that, either.) I wrote some short stories in my 20s and 30s, then abandoned fiction entirely until 2003, when I started writing THE UNNAMEABLES.

Tell us about TEXTING THE UNDERWORLD. What’s the story about? 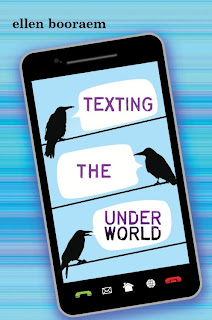 It’s about a scaredy-cat South Boston 12-year-old named Conor O’Neill, visited one night by an inexperienced young banshee named Ashling. She’s there because someone in his family is about to die, but she doesn’t know who or when, only that she will turn into a wraith and keen as the death approaches.

Ashling waits for the death in a cupboard in Conor’s bedroom, but then gets bored and follows him to middle school, where she tries to pass as his cousin from Ireland. Eventually, she and Conor, along with his younger sister and grandfather, travel to the Underworld to see if they can prevent the death.

Conor takes his cell phone with him. Texting ensues.

Sounds so cool! How did the idea of the story come to you?

I was reading ABBEY LUBBERS, BANSHEES & BOGGARTS by the late Katharine Briggs, a renowned British folklorist. Since childhood, I’d thought of banshees as these horrible shrieking wraiths, but Briggs thought they were maidens who’d died too young and returned to warn their families about an approaching death. A maiden like that would have an interesting story, I thought. Three hours later, Ashling and Conor were alive and breathing.

I have a wonderful six-member writers group. We try to meet weekly, but sometimes that works out to twice a month. We just went on a three-day retreat together in Eastport, a sparsely populated  part of the Maine coast where one of us has a house and a “camp.” It was pure magic.

In addition, my partner Rob is an excellent reader. My lifelong friend Shelly Perron is a crackerjack professional copy editor, and has been so helpful I dedicated this book to her. My agent Kate Testerman gives me a great sense of how things are working overall. But the essential diagnostician in my life is my editor, Kathy Dawson. She leaves the solutions to me, but she’s pretty much flawless in identifying what the story is and what’s getting in the way.

Each book also has its group of kid readers, who read the manuscript before the last revision. They’re a huge help. I won’t put their names here because they’re kids, but they are in the book’s acknowledgements.

Both. In my first two books I was pantsier: I knew from the outset what the last line was going to be, but had no idea how I’d get there. For TEXTING, I gave my editor a synopsis before I started writing, so I knew the whole plot from the beginning. That was a barrier at first, because I felt that I’d already told my story. But I learned to ignore the synopsis, or at least to depart from it at will. Now I’m addicted to the reassurance a synopsis offers—it’s nice to know that there is a workable plot out there even if I don’t stick to it.

Definitely drafting—it’s exhilarating, but also scary.  I fight it, so I have to be extremely disciplined or it won’t happen. I sit down at my desk by 9 a.m. and I can’t eat lunch until I have a thousand words. They don’t have to be good words. Just words.

A pot of herbal tea, usually licorice or something gingery and spicey.

Flight, which is bizarre considering how scared I am of heights. But I think if I were under my own power, not relying on a contraption or a rope or something, I’d love flying.

Video of a Burmese python attacking and eating a rabbit. (Poor Conor.) Found it, too!

Quick writing test! Use the following words in a sentence: texting, under, and gracious.

While texting under the tamarack tree
I was stung by a gracious bee.
“Jst stng by B,” I texted my friend,
Waiting to yelp until I pressed “send.”

That was awesome! Finish this sentence: If I'm not writing, I'm probably ...

Normally the answer would be “reading” but right now it’s “playing with the new puppy.”  He’s been with us five days as I write this, and he’s intoxicating.

How cute! Here’s the part where you thank the people who are supporting you. Let's hear your shout outs.

All the people I mentioned in the “beta readers” question, but also fellow residents of Brooklin, Maine, the world’s most supportive town. And the Marauders, a group of fantasy fans from across the globe whom I met nine years ago in a private Harry Potter forum online. We’ve shared all of our lives’ ups and downs, virtually and in person. These days we’re on Facebook, and they’re utterly faithful about “sharing” what I post on my book page.  That kind of moral support is priceless.

My website, ellenbooraem.com, has links to buy books and communicate on social media. It also has background information about banshees, pre-Christian Ireland, and the Underworld figures who appear in the book—basically, any research that I ended up not using.

Awesome. Thanks so much for visiting with us today, Ellen. I can't wait to read your book!

Thanks so much for hosting me on your blog, Dorothy.

Ellen winds up the TEXTING THE UNDERWORLD blog tour at her own blog, Freelance Ne’er-do-well. She’ll be giving you trivia about fifth-century Irish girlhood. See you there!
Posted by Dorothy Dreyer at 7:21 am
Email ThisBlogThis!Share to TwitterShare to FacebookShare to Pinterest
Labels: blog tour, Ellen Booraem, MG adventure, Texting the Underworld

This story sounds so cool and I loved the interview.

Sounds like a fun book! Glad Ellen's having fun with the new puppy :)

Thanks so much for this interview, Dorothy--it was fun!

And thanks for the good puppy wishes, Jess--he's doing fine, although we've underslept a bit.

OMG I love your spur of the moment poem. :D

I love the google question, as authors our google history can be ridiculous!

You do not want to see my Google history! Actually, as writers you'd probably get it :)