Cover Reveal and Excerpt: Blood of a Mermaid by Katie O'Sullivan

Today we're taking part in the cover reveal for BLOOD OF A MERMAID by Katie O'Sullivan. Come take a look, and check out the excerpt! 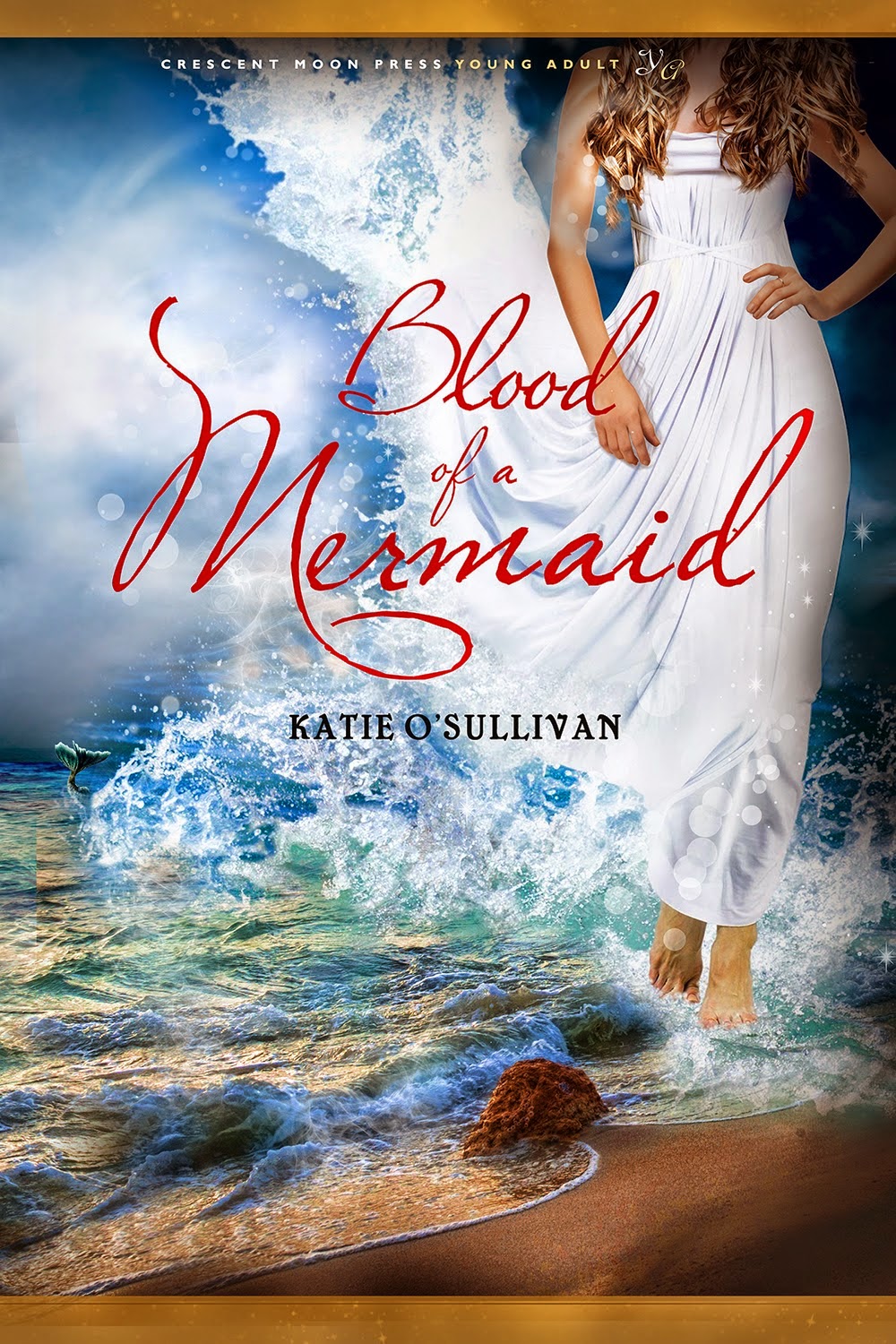 BLOOD OF A MERMAID
By Katie O’Sullivan
Coming from Crescent Moon Press, May 2014

When Shea MacNamara fell into the ocean for the first time, he found he could breathe underwater. The son of a mermaid, the sea is in his blood. Literally. The best part of Shea’s new life? His girlfriend Kae, who also happens to be a beautiful mermaid.

But darkness lurks under the sea. When evil mermen kidnap Kae, the king reminds Shea that having royal blood means making tough choices.

An Arctic dungeon, a fiery plane crash, the legendary halls of Atlantis…and narwhals?

Having mermaid blood just got a lot more complicated.

Shea grimaced. He knew firsthand the damage wind could cause. He’d witnessed tornado destruction back in Oklahoma, when he’d lost his dad and their farm. Wind could be devastating. And deadly. He needed to focus on something else. Maybe curtains and wallpaper weren’t such a bad thing to talk about after all. “Tell me again about this lady who hired your mom to decorate? Why is it she can’t pick out her own curtains?”

Hailey laughed. “Decorating is about more than curtains, you troglodyte. It’s about creating a whole look and feel for a home.”

A deep male voice crackled through the overhead speakers in rapid Greek, followed by English. “Attention, passengers. This is your captain. Please keep seatbelts fastened as we try to steer clear of this turbulence and find a pocket of better air.”

“A pocket of better air?” Hailey shook her head. “What does that even mean?”

Chip leaned back across the aisle and grinned. “Maybe this air is broken?” The light streaming through Hailey’s window shifted as the plane changed direction and Chip’s grin faded. “It looks like he made a ninety degree turn. That seems kind of drastic.”

“I’m sure the pilot’s done this a million times,” Hailey snapped, looking out her window again. “Ooh, look at that lightning over there! It’s like a fireworks display!”

Shea resisted the temptation to look out the window. His stomach already felt queasy enough, and now a storm? A slow tingling sensation engulfed his toes. “How close?”

Shea felt the blood drain from his face. “Water spouts? Like, tornadoes on the ocean?”

Hailey glanced back at him and gently patted his knee. “This isn’t Oklahoma. I’m sure everything’s going to be fine,” she said as she pulled the plane’s information card out of the seat pocket in front of her. “But I guess it never hurts to review a plane’s emergency procedures.”

As she removed her hand from his knee to point at the diagram, Shea felt the tingling course through his legs, zinging from his toes up into his stomach. It was as if some switch in his body had flipped into high gear. Sweat beaded on his forehead and dripped down his back. The air inside the airplane cabin suddenly felt like it was clinging heavily around him, as if it were charged with electricity and Shea was the only magnet on board. He’d felt this exact sensation before, back at Plainville High School.

On the day of the tornado.

Posted by Dorothy Dreyer at 3:24 pm
Email ThisBlogThis!Share to TwitterShare to FacebookShare to Pinterest
Labels: Blood of a Mermaid, cover reveal, Katie O'Sullivan, YA Paranormal