Happy Book Birthday, The Falconer by Elizabeth May!

Today I am pleased to announce the release of The Falconer by Elizabeth May, which is packed full of all the things YA Urban Fantasy fans love, with a touch of Steampunk. Check it out! 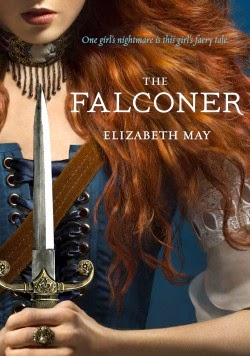 Lady Aileana Kameron, the only daughter of the Marquess of Douglas, was destined for a life carefully planned around Edinburgh’s social events – right up until a faery killed her mother.

Now it’s the 1844 winter season and Aileana slaughters faeries in secret, in between the endless round of parties, tea and balls. Armed with modified percussion pistols and explosives, she sheds her aristocratic facade every night to go hunting. She’s determined to track down the faery who murdered her mother, and to destroy any who prey on humans in the city’s many dark alleyways.

But the balance between high society and her private war is a delicate one, and as the fae infiltrate the ballroom and Aileana’s father returns home, she has decisions to make. How much is she willing to lose – and just how far will Aileana go for revenge?

Elizabeth May was born in California, where she lived during her formative years before moving to
Scotland. She is currently working on her PhD at the University of St Andrews.  When she isn’t writing or doing academics, she can be found with a camera in hand; her photography has been published on an array of book covers and in magazines.

She currently resides in Edinburgh, Scotland, with her husband. THE FALCONER is her début novel.

Posted by Elizabeth Holloway at 8:35 am
Email ThisBlogThis!Share to TwitterShare to FacebookShare to Pinterest
Labels: book release, Elizabeth May, The Falconer, YA Fantasy, YA Urban Fantasy

I'm so looking forward to reading this. I read the first paragraph back before Elizabeth landed an agent. It was for feedback on a forum during Write On Con, and I instantly loved it. Definitely on my TBR list!

I loved the image of a prim and proper lady by day, fae huntress by night - adding to my TBR mountain!