Mellea Wendorn hasn’t exactly had a normal life. Misfortune seems to follow her, and her family, wherever she goes.
However, when Mellea stops to assist a mysterious young man suddenly her prior hardships seem trivial.

His name is Leo. He is a Successor, a child of the Guardians of Selestia.

He is royalty.
He is handsome.
And he wants Mellea completely to himself.

Unable to escape the Guardian’s laws, Mellea must learn the ways of the royals. She is convinced her life can’t get much worse. But when a timeworn Guardian enemy arises from the shadows, Mellea must make a choice that will change her destiny forever.

First and foremost, I didn't intend to read this in one sitting. I personally find present tense a little difficult to get into, so I thought, in the beginning, that I was going to have to take this book in small sections. That was at ten o' clock. At one o' clock I was giving my tablet the evil eye because it was over and I couldn't turn the page and find out what happens next. 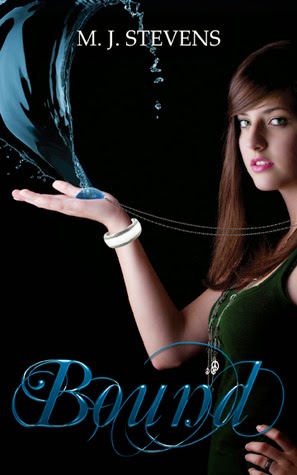 Throughout Stevens' tale, she juxtaposes fast-paced action and dreamlike detail to create a world that feels believable, inhabitable, and as multi-layered as the "real" world. I like that although Bound, in some ways, seems to be a futuristic world with some advanced technologies, the tech is highly relatable and the concerns of Mellea, the young woman at the heart of the story, are the same concerns any girl who grew up in a family scraping for money with a dad who felt the aristocracy had ruined him and a mother who was, perhaps, somewhat too far immersed in her own dream world. Mellea's parents actually remind me a lot of Jeanette Walls' parents, from The Glass Castle (perspective changing nonfiction).

Bound's main characters, Mellea and Leo, are surprisingly likable. In the beginning Mellea seemed a little too likable, a little too good, and I worried that she was going to turn out to be something of a Bella Swan, but she has strong moral fiber, and that's different than being a blank canvas. Leo rather seemed like the rudest most horrid man alive, but there's a little bit of Pride & Prejudice meets Beauty & the Beast going on in Bound, so it's, ultimately, forgivable. Sometimes I read a book and characters are all good or all bad, and they fit only into one archetype or another, but M.J. Stevens sees to just be writing people for her constellation of main characters, and I enjoyed that.

There remains the Stockholm Syndrome issue to deal with in Bound. Mellea is abducted by the Guardians and told she has to unite with Leo (creepy much?), simply because he has chosen her, and is locked in their tower. Her consent to this arrangement is treated as unnecessary, and the threat of violence is ever present. This also represents a sudden escape from her poverty and a guiltless immersion into opulence. On the one hand, this is very much the stuff of dreamy childhood/teenage secret fantasy, on the other hand, it's a fundamental violation of her rights that ultimately *spoilers.* On the gripping hand, through the details, makes for an interesting tale.

All in all, it was a good light read before bed. As the first in a series, I'm sure to be in for some frustration as the subsequent titles are released and things go from no good deed being unpunished to no good deed going unpunished with heaps of heart wrenching complication.

If you'd like a chance to check it out for free, check out the great giveaway after getting to know M.J. Stevens a little better!

For a long time, words were never her best friend. However she has always had a creative spirit and writing became the lead way that she could share her ideas with the world. Today, it is her number one passion in life.

“I wish I could say that I was one of those kids that read insane amounts of books and that’s why I was inspired to write, like a lot of authors. But I actually found the joy on people’s faces [when they talk about stories they love] more inspiring and wanted to create something of my own that will give young readers that same excited expression.”

Posted by Slee at 8:00 am
Email ThisBlogThis!Share to TwitterShare to FacebookShare to Pinterest
Labels: book reviews, Bound, giveaways, Stockholm Syndrome, Xpresso Book Tours, YA Fantasy, YA Romance, YA Sci-Fi, YA Science Fiction

Glad you liked it, Sandra! This sounds right up my alley and I'm intrigued by the Stockholm Syndrome aspect, too! Wonderful review!

I like it when the line between science and fantasy isn't clear, or the main point.