While I generally have a predisposition to come out as against anything that seems to encourage the destruction of books, I'm going to give Kewin a pass on certain crucial plot points and cede that sometimes, some books just need burning... if you can manage it.

There's something particularly wonderful about a book that can catch a reader and immerse her in it's world from the first sentence, drawing a thick and tangible atmosphere out of the ink-like pixels of the e-reader as though the world in which the characters inhabit were as solid as the one in which the reader sits, if not more so. In Hedge Witch, the first book in The Cloven Land Trilogy, the immediate hook and lure of Simon Kewin's writing will draw you in and fold you into Cait's world, without any time or desire to question the reality he's constructed. I admit, when Cait goes into the Library basement, I want to be there, and for a moment, before everything turned violent, felt like I was. 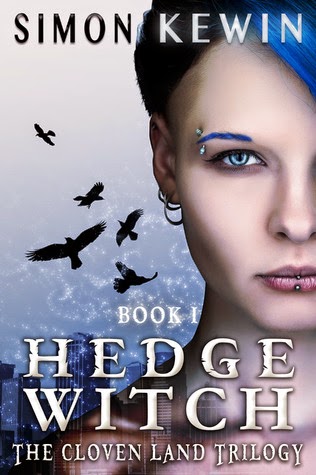 While the concept that a person inhabiting the "real world" is going about her own business as if everything is normal and not having the foggiest notion that the magical world exists, and that they're intrinsically bound to it, then spending the rest of the book learning the rules of the magical world with the reader is, possibly, one of the most common themes in fantasy, particularly urban fantasy, or fantasy where the main character is someone who comes from the world as we know it. Of course, how else can the reader and the character be easily introduced to the world? All in all, I think that amid the action and world hopping, between Cait's world of danger and the witches' isle, where magic is the norm,  between the secrets being uncovered, and the dangers being fought,  between the witches and the udain, Kewin does a good job of bringing the audience along on an adventure of discovery and survival, while ever driving home the reminder that what one does will ever and always come back to them.

This is a good book for people who enjoy reading tales of witches, the paranormal, and fantasy, but like their characters spirited, relate-able and modern.

Hedge Witch is available on Amazon

AUTHOR BIO:Simon was born on the misty Isle of Man but now lives deep in the English countryside with his wife and two daughters.
He writes science fiction and fantasy as well as some stories that can’t make their minds up.
Find out more on his website at simonkewin.co.uk.
Author Links:http://www.simonkewin.co.uk/https://www.goodreads.com/author/show/4013862.Simon_Kewinhttps://www.facebook.com/pages/Simon-Kewin-Author/139665209438997https://twitter.com/SimonKewin

Posted by Slee at 9:00 am
Email ThisBlogThis!Share to TwitterShare to FacebookShare to Pinterest
Labels: fantasy, Hedge Witch, Simon Kewin, YA Fantasy

I love those books that really hook you from the start and brings you into the world completely. This sounds like a fun read! Great review, Sandra!

Thanks Giselle, I think that the strength of the writing here is in the details and the thoughtful description. Anyone can say "it was foggy" but it takes some artistry to describe the fog in a way that makes it tangible for the reader and gives it character, without it overpowering a scene.