Book Blitz: When Sparrows Fall by Diana Blackstone PLUS Excerpt 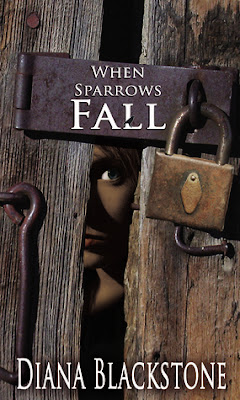 When Sparrows Fall
by Diana Blackstone
Release Date: June 9th 2015
Publisher: Leap Books
After her mother’s arranged marriage to her recently deceased father’s bitter brother, thirteen-year-old Susanna Stutzman faces a crisis of faith. Everything seems to be going wrong in her life. As if her new father’s nasty temper isn’t enough, her cousin Mary, now her stepsister, hates her, as does her new teacher. When Susanna’s discovery of a strange nighttime visitor at her mysterious neighbor’s home leads to the unveiling of secrets, Susanna is forced to make a choice between her conscience and her Mennonite community.
Purchase Links:
Goodreads | Smashwords | Amazon | iTunes | B&N

That night, sleep eluded me again as I thought about Uncle Jacob’s prior courtship with Sister Brubaker. Reliving my moments on the steps with Martha, I smiled in the darkness. It felt good to have a new friend. Surrounded always by family, I hadn’t realized how lonely I’d been.

Through the slightly open window, the sound of a dog barking in the distance interrupted my thoughts. I scooted out of bed and tiptoed to the window, not wanting to wake Mary. I pulled the curtains apart.

No mysterious lanterns or wagons tonight. The moonlight dusted the treetops with silver. An owl hooted nearby. A cat crouched in the grass, prepared to pounce on its unsuspecting midnight feast. Subtle movement in the shadows caught my eyes. The doe had returned, along with another. They grazed peacefully under a crabapple tree near the fence.

Suddenly, their heads jerked upright, and they stared briefly in the same direction before leaping into the darkness.

I craned my neck to see what startled them but quickly stepped backward. Aunt Lydia had left her house and was heading toward the barn. This time no man accompanied her, but she carried a heavy-looking basket in her arms. She was in the barn no more than a minute before she emerged again and walked toward the house, her arms empty. Why had she left the basket in the barn? What was in it?

I leaned toward the windowpane again, trying to get a better look. She stopped and glanced up toward me. My heart skipped a beat and began to race. I fell back into the shadows. Had she seen me? I waited a moment until the beats in my chest returned to almost normal, then crouched down and peeked through the outside edge of the curtain. She was nowhere in sight.

What was she hiding in that barn? Stolen property? Moonshine? The desire to sneak over there and snoop was almost overwhelming, but if I were caught, my uncle’s wrath would be severe. No, I had better not risk that. A gust of cool air blew through the window, raising goose bumps on my arms. I pulled it shut, closed the curtains, and crawled into bed.

Diana has been a voracious reader since age nine when she discovered The Chronicles of Narnia after a librarian handed her the first book in the series. She credits hay fever for her interest in writing stories. Unable to play outside without misery from the age of ten, she spent half of every summer vacation inside reading and writing stories until the pollen count dwindled.
Diana serves as a high school English teacher and academic support coordinator. She originally chose to teach older students because she thought they would be able to manage their own bodily fluids better than little kids would. She’s discovered she was mostly right about that, and as a bonus, she finds teenagers a blast to spend her days with.
She lives in the Pacific Northwest with her husband Alan and youngest son Isaac. Her adult son Mitchell lives only a four-hour drive away, but Diana wishes it was four minutes instead. She has two cats. Her Maine Coon named Mister Mistoffelees weighs twenty pounds. He is as sweet as he is huge. The other is a feisty Siamese-mix named Sabrina.
Goodreads | Website | Facebook | Twitter