Blog Tour: Scar of the Downers - Interview with Scott Keen PLUS Giveaway

Today we're joining the SCAR OF THE DOWNERS tour by chatting with author Scott Keen. Grab a cool drink and settle in while we get to know all about Scott and his book. And be sure to check out the rafflecopter contest at the end of the post.

Hi, Scott! Welcome to We Do Write! Tell us a little about yourself. 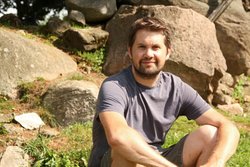 I grew up in rural New York, went to college in Tennessee and graduate school in Virginia. I now have four daughters ranging in age from two to ten, the older of which I homeschool. I actually went to law school for a semester before deciding to pursue a Masters of Fine Arts in Script & Screenwriting. I’ve been writing on and off since high school, but it was mainly poetry or songs until I went to graduate school.

Tell us about SCAR OF THE DOWNERS. 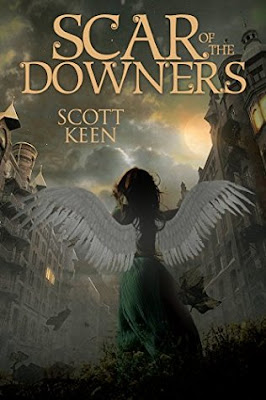 Scar of the Downers is a young adult fantasy about two slaves named Crik and Jak, who are thrust into a difficult spot. Do they stay in the dark city of Ungstah under Kilvar, their cruel owner, or do they try and escape, knowing if they fail it is guaranteed certain death? It is a story about finding hope when no hope exists. It’s about rising above the scars that one bears in life, about breaking free from the things that hold you down. Ultimately, it’s about freedom. How far would you go to seek it? How much pain would you endure to capture it?

Sounds interesting! How did the story come to you?

Eight or nine years ago, while I was still in graduate school, I started writing a short story. Perhaps it was just an idea of a story. A rich man had adopted an orphan from the street and was watching him play in the yard. There was something within the orphan that was pulling him back to the streets. It was as if the street had control over him.

That was the birth of this story. How do you break free from something that has control over your life? How far would you go to achieve that freedom? That idea is what inspired me. In fact, it still inspires me.

I consider myself a little bit of both, but I probably do more plotting. I have to know where I’m going. I don’t like plotting too much because I like to leave enough room for something to grow organically from the storyline. You never know when an idea will come to you, so you must leave enough space in your story for that to happen.

What do you have to have nearby while writing?

A book and something to drink (usually it’s coffee).

If you could have any super power, which one would you choose?

What's the weirdest thing you ever googled?

I would have to say that it was probably some weird malady that I, or one of my daughters, was experiencing.

... spending time with my wife and daughters.

My parents have been helpful (especially watching the children when needed), but they’ve also helped with my book launch and have been supportive of that.

But I could not have done any of this without my wife, Elizabeth. She is truly my biggest supporter and fan. She’s a great encourager to begin with. It’s just a part of her nature. But she is the one to whom I am most indebted. I love her greatly.