Review: An Absence of Light by Meradeth Houston

Meradeth Houston is a master of drawing a reader in. From sentence one, she establishes urgency and interest, immersing the reader in the sheer horror that has become Leah's life. Leah, who goes by Lee throughout the story, a 19 year old girl who is brighter than average, but troubled by having "seen things" since childhood, tells the tale of her flight from the horror that killed her family, and the war she personally wages against them when banding together with the first group of people she's ever met who also can see them.

This book has some good things going for it. Got a nearly but not quite disincarnate new menace that hasn't been done into the ground with it's own new set of complex rules and motivations? Cool beans. In An Absence of Light, the creepy new foes are the Shadows, and yes, they're a tiny touch 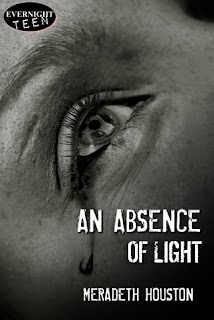 reminiscent of the Shadows from Babylon 5 (wow I just admitted a lot about my age), but they're definitely their own creatures. I like that. Foes that are nearly believable and prey on the fears at the back of every kid's mind when mom and dad turn out the lights? Double cool beans. That's why I like Doctor Who, after all. Characters who aren't an immediate tight fit because of their own diverse issues? Triple cool beans.

Of course, there are a couple issues. For those who don't love first person, this is that, and it spends a lot of time focusing on what Leah is thinking rather than just doing. Also, the intermittent switching between deep detail and sudden change of scene action occasionally left me flipping back. I was also really confused for a moment when the third day of the story happened, because after referring to the events of the first night as "last night" rather than "the last night," I got it in my head that the rest of the story would take place in a tightly action filled single day. Yeah, it's not 24. I get that, but I had a moment of confusion.

So, if you're in for a first person struggle against darkness wherein the balance between hunter and hunted is constantly shifting, with occasional sudden pacing shifts, this will be a great way to keep yourself sleeping with the lights on. After all, isn't that what we all want: a reason to sleep with the lights on?

Synopsis:
Leah’s always seen the shadow creatures. She thought she was immune to their evil—until now.

She’s walked into a massacre, stolen a BMW, and is running from the law for a crime she didn’t commit. Nineteen-year-old Leah’s life just went from mildly abnormal to totally crazy at lightning speed. But no one will believe that the shadow creatures are framing her for the murder, because she’s the only one that can see them. At least that’s what she thought.

When Leah stumbled across a group who share her ability, she discovers they have something she doesn’t: a way to fight back. When the group offers to teach her how to kill the shadow creatures, Leah jumps at the chance. But something is brewing with the creatures. They’re tracking down the hunters like there’s no tomorrow. Leah suspects that maybe there won’t be, and it’s up to her to make sure tomorrow comes. Because she’ll do anything to stop the shadows, including risking her life—and the life of the one she loves—to keep the world from being lost to darkness forever.

AUTHOR BIO:
Meradeth’s never been a big fan of talking about herself, but if you really want to know, here are some random tidbits about her:

>She’s a Northern California girl. And now is braving the cold winters in Montana.
>When she’s not writing, she’s sequencing dead people’s DNA. For fun!
>She’s also an anthropology professor and loves getting people interested in studying humans.
>If she could have a super-power, it would totally be flying. Which is a little strange, because she’s terrified of heights.

Thanks so much for joining in on the tour and for the great review! I know I enjoy a good reason to sleep with the lights on ;)

Thanks so much for your review, Sandra! And for joining in on the tour :) If you have a second, and it’s not too much trouble, would you mind posting your review to Amazon? It would really help me out! Thanks either way!! (http://www.amazon.com/An-Absence-Light-Meradeth-Houston-ebook/dp/B00OY1ZFJW)