Not every book is for every reader. I admit, I am not the right match for Spinner. That isn't to say that it doesn't have it's merits. There are a lot of readers who remain unmoved by Pride & Prejudice, despite it's sass and unconventional use of an ampersand in the title. So, rather than talk about my personal issues, because really, what good is that going to do you, a prospective reader, I'm going to tell you what there is that makes Spinner kind of awesome anyway. 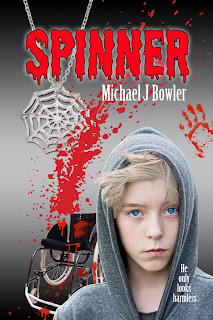 First and foremost, in Spinner, Michael J Bowler embraces diversity. I am always a little disheartened that most of the YA literature out there forcuses on economically stable, healthy, cis gendered, white kids. The whole focus of Spinner is on outcasts, misfits, and a boy in a wheelchair since birth. Serioiusly, books that draw attention to diverse characters and therefore give diverse readers characters with whom they can empathize need to be given their due. Ableism in literature is so last century.

I like that Bowler writes about characters in awful situations that, although infused with the supernatural, still resemble the awful situations that some of his readers live every day, or if they don't, maybe they know someone at school who does. Bowler gives voice to their issues, like the woefully mishandled youth perpetually stuck in a dysfunctional and often abusive foster system.

Those kids are real, and their stories have merit, just in case those in a position of privilege forgot.

So this is a good book for inciting conversations on topics that usually don't arise from reading the latest paranormal YA book on the shelf, and so even though it may not be the best fit for every reader (like me), it is a good book to add to your summer reading list this July. Check out the summary and the author bio below, then hop on the giveaway too.

Spinner Book Summary:
Fifteen-year-old Alex is a “spinner.” His friends are “dummies.” Two clandestine groups of humans want his power. And an ancient evil is stalking him. If people weren’t being murdered, Alex might laugh at how his life turned into a horror movie overnight.

In a wheelchair since birth, his freakish ability has gotten him kicked out of ten foster homes since the age of four. Now saddled with a sadistic housemother who uses his spinning to heal the kids she physically abuses, Alex and his misfit group of learning disabled classmates are the only ones who can solve the mystery of his birth before more people meet a gruesome end.

They need to find out who murdered their beloved teacher, and why the hot young substitute acts like she’s flirting with them. Then there’s the mysterious medallion that seems to have unleashed something malevolent, and an ancient prophecy suggesting Alex has the power to destroy humanity.

The boys break into homes, dig up graves, elude kidnappers, fight for their lives against feral cats, and ultimately confront an evil as old as humankind. Friendships are tested, secrets uncovered, love spoken, and destiny revealed.

The kid who’s always been a loner will finally learn the value of friends, family, and loyalty.

His horror screenplay, “Healer,” was a Semi-Finalist, and his urban fantasy script, “Like A Hero,” was a Finalist in the Shriekfest Film Festival and Screenplay Competition.

He grew up in San Rafael, California, and majored in English and Theatre at Santa Clara University. He went on to earn a master’s in film production from Loyola Marymount University, a teaching credential in English from LMU, and another master's in Special Education from Cal State University Dominguez Hills.

He partnered with two friends as producer, writer, and/or director on several ultra-low-budget horror films, including “Fatal Images,” “Club Dead,” and “Things II,” the reviews of which are much more fun than the actual movies.

He taught high school in Hawthorne, California for twenty-five years, both in general education and to students with learning disabilities, in subjects ranging from English and Strength Training to Algebra, Biology, and Yearbook.

He has also been a volunteer Big Brother to eight different boys with the Catholic Big Brothers Big Sisters program and a thirty-year volunteer within the juvenile justice system in Los Angeles. He is a passionate advocate for the fair treatment of children and teens in California, something that is sorely lacking in this state.

He is currently outlining a sequel to Spinner.

His goal as a YA author is for teens to experience empowerment and hope; to see themselves in his diverse characters; to read about kids who face real-life challenges; and to see how kids like them can remain decent people in an indecent world.

Thank you so much for your honesty and fairness as a reviewer, Sandra. I love what you wrote. Take care.

Thanks Sandra and Dorothy for helping spread the word to YA readers about Michael's book :)