For those of you who don’t remember, We Do Write interviewed O. M. Grey when her book, AVALON REVISITED, was first released, back in 2010. Then, we celebrated when AVALON REVISITED was re-released in January of this year. And today, we are lucky to have Ms. Grey back for another interview!

Welcome back to We Do Write! Tell us about the re-release of AVALON REVISITED. How did this all come about?

Imagine my surprise when my agent, Louise Fury, called one day late last year and told me Riverdale Ave Books wanted to re-release Avalon Revisited! Louise has worked with Lori Perkins for several years, and they both adored the novel. We were all disappointed when several NY publishers said they loved it but ultimately couldn't publish it because of the unconventional male POV in a romance novel. Lori has breathed new life into Avalon Revisited, and I couldn't be more pleased.

I've had the most fabulous time working with the lovely folks at Riverdale Ave Books. Plus, they love my work. Since the re-release of Avalon Revisited, they've also released my short story "A Kiss in the Rain" on the Kindle and opened their WE LOVE NY anthology with my short story "For the Love of a Book."

"A Kiss in the Rain" is a Gothic Erotica Ghost Story from another era. Eliot, a professor and inventor, suffers unbearable grief over the loss of his dead wife. Though an expert in the new invention of electricity, it seems that even modern science cannot bring her back, but maybe there is a force even more powerful? My publisher, Lori Perkins, calls me the female Edgar Allen Poe, and I don't think there could be a higher compliment for someone who writes Gothic Horror.

That is quite a compliment! Your writing must really impress her. Remind us all what AVALON REVISITED is about. 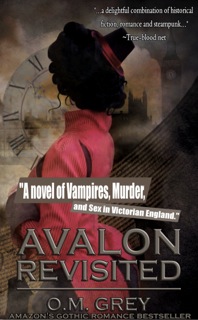 Arthur Tudor has made his existence as a vampire bearable for over three hundred years by immersing himself in blood and debauchery. Aboard an airship gala, he meets Avalon, an aspiring vampire slayer who sparks fire into Arthur’s shriveled heart. Together they try to solve the mystery of several horrendous murders on the dark streets of London. Cultures clash and pressures rise in this sexy Steampunk Romance.

Sounds intriguing. I mean, who can resist a steampunk vampire/vampire-hunter romance? Very hot! And what an awesome cover!

My favorite thing about writing Steampunk is, on one hand, anything goes! If you can imagine it, you can build it. From fantasy to romance to horror, the gadgetry and technology of Steampunk can create wondrous worlds. At the same time, the way I write Steampunk, you can choose to keep some historical parameters, giving your world a structure in reality. For me, it makes it all more believable. My characters are sometimes real historical figures, like Madame Jeffries, and the technology used within my novels actually existed 150 years ago.

In steampunk, it is ALL about those details. They really make the world of the story into a world you wish you could walk around in for a day.

Now that AVALON REVISITED has been out for a few months, what are you working on?

I've just finished the final draft of Avalon Revamped, a sequel, of sorts. I always throw the "of sorts" into the mix because although it takes place in the same world with many of the same characters, it is an altogether different book. Not the dark, cheeky romance of Avalon Revisited, Avalon Revamped is horror through and through. This is what happens AFTER the "happily ever after," when Prince Charming turns out to be a narcissist sociopath who not only fooled the princess, but also has complete control over her and her body. While Arthur as the anti-hero again, emphasis on ANTI, I introduce Constance, a succubus who punishes those who abuse and destroy women, as the anti-antagonist. A supernatural female Dexter in Steampunk London, as it were. The book is ruthless, and so is Constance. Any false character growth from the first book is washed away as Arthur reveals his true self: a sociopathic vampire who cares for nothing or no one besides his own selfish desires, forever looking for that fairy tale perfect love. A narcissist, bored with his existence and his relatively new lover. So horrified by the darkness within himself, he's always looking for the next distraction, the next warm body to fill. It will take the strength, love, and empathy of Avalon to save him from a most horrific fate at the hands of Constance, but after the way he treats Avalon, will she want him to be saved?

Very cool premise! I can’t wait to get my hands on it, and on AVALON REVISITED.

Thanks for joining us!

Thank you so much for having me today. May you all find peace.

Avalon Revisited: http://t.co/96ECerwM
The Zombies of Mesmer: http://t.co/2EQG5UQy
Caught in the Cogs: http://amzn.to/frd5hv
We Love NY anthology: http://goo.gl/bkTWk
"A Kiss in the Rain": http://goo.gl/1wGqw
Look for all my titles on my Amazon Author Page: http://amzn.to/eqd7MQ
Posted by Elizabeth Holloway at 11:21 am
Email ThisBlogThis!Share to TwitterShare to FacebookShare to Pinterest
Labels: anti-romance, Avalon Revamped, Avalon Revisited, interview, O M Grey, romance, Steampunk

This is what happens AFTER the "happily ever after," when Prince Charming turns out to be a narcissist sociopath who not only fooled the princess, but also has complete control over her and her body.

Thank you, Dorothy! I hope it's received well.

Thanks, too, for the interview! I'll definitely let you know when Avalon Revamped will be released.