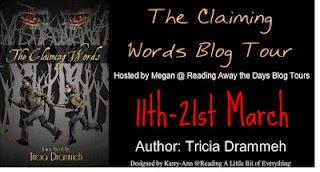 Today we are excited to interview Tricia Drummeh on the first day of her Blog Tour. And don't miss the giveaway for her novel, The Claiming Words, at the end of this post! 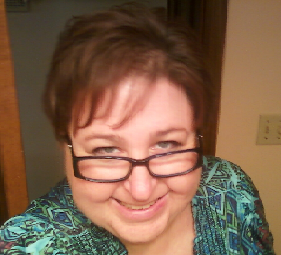 Tricia Drammeh is a wife and a mother of four children. Although she currently lives in Missouri, she has called many places home, including Georgia, Ohio, and California. She’s worked in retail, customer service, sales, and accounting, but writing has always been her dream career. When she isn’t writing, she enjoys reading, drinking vast amounts of coffee, and spending time with her family and the multitude of animals who have taken over her home. Tricia is currently working on her sixth novel.

Welcome to We Do Write, Tricia. Tell us about The Claiming Words. What's the story about?

The Claiming Words is the story of Rachel and Alisa, two girls who grew up in the same small town, but were never friends. When Jace moves to town, they’re both drawn to him. Rachel senses there is something different about him, but Alisa is the first to discover his secret. Both girls are pulled into a world of magic and danger, but only one can win Jace’s love.

Exciting! I love a good love triangle with a hot guy at the top! How did the idea of the story come to you?

The story started with an imagined conversation between two brothers fighting over the same girl. That scene never made it into the first book, but it’s what got me started.

Well, that's all that counts, right? It set you on the path. Do you have a critique group/partner or beta readers, or do you self-edit?

Initially, I had the book posted on Authonomy by Harper Collins. I got some very helpful feedback from members, particularly a few very special authors. Once the book was accepted for publication, my editor tweaked it a little more.

Now, this is important: Are you a plotter or a pantser?

Oh, I’m a total pantser. I never plot anything. It spoils the fun if I know how the book is going to end.

Yes! *high five* I'm with you, sister! What’s the hardest part of writing for you?

Right now, the hardest part of writing is finding the time. I’ve been working on edits for one book, while trying to find time to keep up with my blog. And, I have three kids still living at home, so there’s always something going on.

The lack of time is a pain, isn't it? I vote we take a petition to have the day extended by 3 hours. Not too much; I don't want to be greedy. Just enough to leave time for pesky kids and blog posts.

Coffee. I can write anywhere, any time. But, coffee is a must.

I would like to be able to fly. It’s something I’ve dreamed about since I was a child.

Boy, that’s a tough one! I’ve googled some of the weirdest things… Kenyan cuisine, how to perform a séance, the walking distance from Senegal to Mauritania, and so many other random things.

Quick writing test! Use the following words in a sentence: calmed, demonstration, and stationary.

The King longed to flee the battlefield, but remained stationary and continued his speech, and this demonstration of his confidence calmed the anxious warriors.

Oh! I hope the battle turns out okay. Finish this sentence: If I'm not writing, I'm probably ...

Reading. I read way too much.

So, who are the people supporting you? Who would you like to thank?

I have to thank my husband, because without his support, the kids would have gone unfed. My husband was a trooper, doing laundry and cooking dinner during those dark days when I was hunched over my computer muttering at my imaginary friends. I have to thank my kids too for putting up with me. And, my beta readers: Lisa, Tockica, Jacoba, and many others who helped whip the book into shape.

I’m on Amazon, Barnes & Noble, and Books a Million. The book is available in both ebook and paperback. And, you can always stop by my website: http://www.triciadrammeh.com 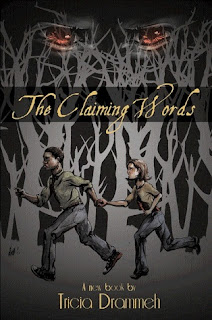 You can win a copy of The Claiming Words by Tricia Drammeh (open to US/Canada and UK)!!

The Alexanders have always kept their secrets hidden…
When sixteen-year-old Jace Alexander moves to the small town of Oaktree, Georgia, he attracts the attention of every girl in school. Shy, introverted Alisa Cole immediately casts Jace in the leading role of her latest fantasy, but she assumes he’ll never return her interest. After she saves Jace from a Hunter, everything changes. Her accidental discovery of Jace’s secret propels her into a world of magic and danger. Alisa’s newfound courage is put to the test when Jace introduces her to his intimidating older brother, Bryce, and she decides she would rather battle a Hunter than endure another moment under Bryce’s intense scrutiny.

Jace and Bryce aren’t the only ones with secrets…
Rachel Stevens is the girl who has it all. She’s beautiful, popular, and in possession of an ancient power which endangers not only her, but those sent to protect her. Jace is drawn to Rachel—and he isn’t the only one. The Demon Re’Vel will do anything to claim her—even if it means waging a war with the entire Alexander family. As layers of secrets are peeled away, revealing the truth of her heritage and her family’s betrayal, Rachel struggles to resist an immortal suitor who stalks her in her dreams. With the Alexanders fighting to protect her, can Rachel escape the power of the Demon and his Claiming Words?

Thank you for interviewing me on your wonderful blog!

It was a pleasure to have you! Thanks for participating!