Book Blitz: Out of Control by Sarah Alderson

Today we're joining the OUT OF CONTROL Book Blitz. Take a look at this young adult thriller, and don't forget to enter the rafflecopter at the end of the post! 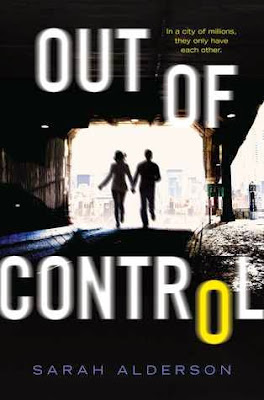 A girl looking to escape her past in New York City ends up on the run from a dangerous conspiracy in this sizzling, high-stakes novel.

When seventeen-year-old Liva came to New York City, all she wanted was to escape the painful memories of her past and finally find a fresh start. Her hopes for a new future were dashed the moment she became the sole witness to a brutal murder. When she’s taken into police custody—supposedly for her own protection—she realizes something isn’t right, but it’s too late. Soon, bullets start flying, and Liva realizes that she is not just a witness, but the target—and she needs to escape before it’s too late.

With the help of a sexy car thief that she met at the station, Liva manages to get away from the massacre unharmed, but now the two of them are alone in New York, trying to outrun and outwit the two killers who will stop at nothing to find them. Liva and Jay are living on the edge, but when you’re on the edge, there’s a long way to fall.

AUTHOR BIO:
Having spent most of her life in London, Sarah quit her job in the non profit sector in 2009 and took off on a round the world trip with her husband and princess-obsessed daughter on a mission to find a new place to call home. After several months in India, Singapore, Australia and the US, they settled in Bali where Sarah now spends her days writing by the pool and trying to machete open coconuts without severing a limb.

She finished her first novel, Hunting Lila (winner of the Kingston Book Award), just before they left the UK, wrote the sequel on the beach in India and had signed a two book deal with Simon & Schuster by the time they had reached Bali.

A third book, Fated, about a teenage demon slayer, was published in January 2012.

The Sound, a thriller romance set in Nantucket, was published in August 2013 and this was followed by the critically acclaimed Out of Control in May 2014.

Posted by Dorothy Dreyer at 6:52 pm
Email ThisBlogThis!Share to TwitterShare to FacebookShare to Pinterest
Labels: book blitz, Out of Control, Sarah Alderson, Simon Pulse, YA thriller