Good morning, everyone. Hope you all enjoyed the long weekend. Today we're taking part in the UNDERTAKERS: LAST SIEGE OF HAVEN blog tour by indulging in a guest post from author Ty Drago. I've had the privilege of meeting Ty in person on more than one occasion, and believe me when I say he's very entertaining to talk to. That said, let's take a look at the fourth book in his UNDERTAKERS series before we dive into Ty's guest post, shall we? 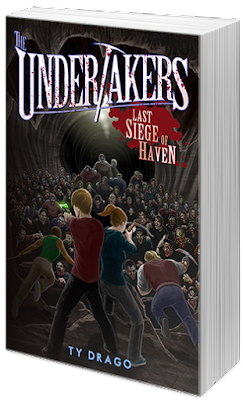 While away on an undercover mission, Undertaker Will Ritter has made an unthinkable alliance...with a Corpse! But though Robert Dillin (aka 'The Zombie Prince') is indeed one of those alien invaders who animate and possess the bodies of the dead -- unlike the rest of his kind, Dillin isn't evil. In fact, he wants to help. And Will needs that help, because the Queen of the Dead has learned the location of Haven, the Undertakers' secret HQ, and is planning a massive and deadly assault.

With the last day of the Corpse War finally upon them, Will and his friends find themselves in a desperate race to close the Rift between worlds and forever kill the Corpses. But can they do it before Haven is overrun?

For that matter, can they do it at all?

And now, let's hear what Ty has to say about writing for a middle grade audience.

Challenges of Writing for an MG Audience
I like to tell people that I scare children for a living.
I’m the author of the Undertakers series, five middle-grade horror novels (plus one novelette), all centering around a desperate struggle between a rag-tag group of runaway teens and an invasion of “Corpses,” alien invaders who possess and occupy the bodies of the recently dead.  My stories are full of intelligent, evil, rotting cadavers, and heroic kids doing their best to fight them in a war that only they know is happening.  My goal in my novels is, of course, to entertain.  But I’ve chosen to do so, in no small part, by pushing the envelope of what is considered “too scary” for middle schoolers.
And, to my pride – and considerable relief – it works!
The trick, I’ve found, to writing for an age group that’s frankly forty years younger than myself lies in understanding them.  Not that doing so was easy.  When I penned the first Undertakers novel, my son Andy, thirteen-years-old at the time, read it and told me I’d missed the mark completely!  Apparently, kids don’t talk the way they did when I was a preteen.  Everything about them, from their social structure to their manner of dress has changed.  So, I had to start over.
Andy helped.  Over the next year or so, he became my teacher and guide, enlightening me to the realities of his world.  Frankly, the Undertakers series wouldn’t have happened without him, which is why the first book, Rise of the Corpses, is dedicated to my son.
So, in the spirit of spreading education, it seems only fitting that I should pass-on some of what I learned to help my fellow MG authors.  Here then, are Ty Drago’s “Simple Rules for Writing MG Horror”:

I guess the bottom line is this: Middle grade readers want what all readers want.  They want to be told an engaging story that captures their imagination and holds their interest.  They want characters they can relate to, root for – and, if necessary, grieve for.  They don’t want the writer to tell them what he or she thinks they can “handle.”   Trust me, they can handle more than you think.

Just tell your story with honesty and truth, and the kids will love it! 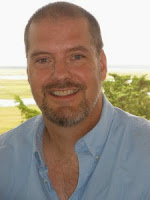 Ty Drago does his writing just across the river from Philadelphia, where the Undertakers novels take place. In addition to The Undertakers: Rise of the Corpses,The Undertakers: Queen of the Dead, and The Undertakers: Secret of the Corpse Eater, he is the author of The Franklin Affair and Phobos, as well as short stories and articles that have appeared in numerous publications, including Writer’s Digest. He currently lives in southern New Jersey with his wife and best friend, the real Helene Drago née Boettcher.