Today we are taking part in the cover reveal of IMMORTALIS - THE GUARDIAN by Leah Lozano. Take a look! 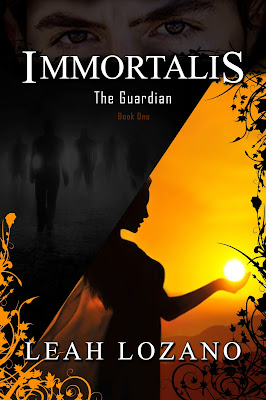 As she struggles to deal with the loss of the only family she has ever known, twenty-year-old Lina’s strange visions catapult her into the midst of a war on the other end of the universe. Torn between two men—the unnamed midnight-eyed man, who exists solely in her visions and Archos, her ever-present neighbor who makes her intuition scream danger despite his gentlemanly ways—Lina must save herself from a rebel force who believes she is the dangerous answer to their prophecies, find the truth of her own origins and inner strength, and battle epic forces of evil while facing a terrifying realization ...

Begin the epic fantasy series, Immortalis and be enlightened!

Mysterious and sensational, dangerous yet exciting, Leah Lozano’s spine-tingling fantasy takes readers on a spellbinding ride that they will never want to end.

Awesome blog. I enjoyed reading your articles. This is truly a great read for me. I have bookmarked it and I am looking forward to reading new articles. Keep up the good work!
internship for web development | internship in electrical engineering | mini project topics for it 3rd year | online internship with certificate | final year project for cse