Hello, and welcome to our stop on the VESSEL blog tour. Today we're chatting with author Lisa T. Cresswell, getting to know all about her and her book. Grab a comfy seat and take a gander at what she has to say. 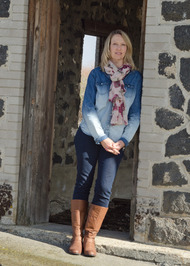 Lisa, like most writers, began scribbling silly notes, stories, and poems at a very young age. Born in North Carolina, the South proved fertile ground to her imagination with its beautiful white sand beaches and red earth. In fifth grade, she wrote, directed and starred in a play “The Queen of the Nile” at school, despite the fact that she is decidedly un-Egyptian looking. Perhaps that’s why she went on to become a real life archaeologist?

Unexpectedly transplanted to Idaho as a teenager, Lisa learned to love the desert and the wide open skies out West. This is where her interest in cultures, both ancient and living, really took root, and she became a Great Basin archaeologist. However, the itch to write never did leave for long. Her first books became the middle grade fantasy trilogy, The Storyteller Series. Her first traditionally published work, Hush Puppy, is now available from Featherweight Press.

Lisa still lives in Idaho with her family and a menagerie of furry critters that includes way too many llamas!

Hi Lisa! Welcome to We Do Write. Tell our readers a bit about VESSEL. 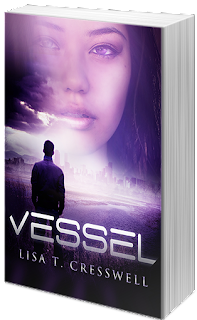 Vessel is a dystopian tale set in a future Europe after a catastrophic solar storm has disabled the Earth’s electrical grid and society has returned to a medieval-like existence. When a disfigured slave girl frees two heretics from imprisonment, she’s drawn into a much bigger story, which you’ll have to read to find out about.

I had heard or read a story about solar storms having the potential to knock out power on Earth if they’re strong enough. At the time, e-books were just gaining popularity and I wondered if we might ever get to a place where all our books were electronic. What if all the computers crashed and we lost them all? How would our world change?

Most definitely a plotter. I’ve learned it’s better for me to not even start a new book until I have a full chapter by chapter outline written. I may not always stick to that outline as the first draft goes along, but I need some idea of where the story is going so the beginning and the middle are all working toward that goal.

Editing, without a doubt. I love the first draft stage so much. It’s so much fun to create that new world and my new characters. It’s so much harder to look at that first draft objectively, see what needs work, and then do that work.

I’m pretty easy. I don’t have to have much more than some quiet, a notebook and a pen. Purple ink is fun too, but I’ll use whatever is handy.

Remember I Dream of Genie when Genie blinked her eyes and could just poof! Transport herself anywhere? I’d like that! I waste so much time driving I could be spending on writing. I really hate that.

Weird is a relative term. ☺ I did recently google street names in Mumbai, India, and Egyptian foods for a new steampunk adventure I’m working on. It made me hungry!

... gardening! I love flowers and growing tomatoes so I can make homemade salsa.

There are so many people too! I want to sincerely thank everyone at Month9Books that helped me get to this day. I especially want to thank Georgia McBride, the publisher who gave this novel the chance it needed to shine, all the diligent editors who helped improve it along the way, and the fantastic publicity team at Month9Books, including the tireless Chapter by Chapter Book Tours team and all the wonderful book bloggers that volunteer their internet space to get the word out. Even my fellow Month9Books authors have been a tremendous source of support and encouragement. They’re all awesome human beings and I'm so grateful I've had the chance to work with them. They humble me with their dedication, generosity, enthusiasm, and kindness every day. Peace~

Thanks so much for hosting me, Dorothy! I really appreciate it :)