Today we're featuring books by Rob E. Boley by having a chat with him. Learn all about these dark retellings of traditional tales.

Hi, Rob! Welcome to We Do Write. Tell us a bit about yourself. 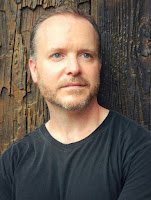 I grew up in a small village called Enon near Dayton, Ohio. Growing up in a small town is great for creativity. You have three options: 1) be bored; 2) figure out interesting ways to entertain yourself; or 3) get in a lot of trouble. I did plenty of options 2 and 3.

I’ve been a writer since high school, but mostly only wrote poetry until my daughter was born in 2005. Something about becoming a dad made me want to tell stories. It grounded me a bit but also opened my mind at the same time. I wrote a few screenplays and short stories, and then some horrible novels that never ever ever need to see the light of day, until finally I started The Scary Tales.

Tell our readers a bit about THE SCARY TALES.

I call it a fairy tale of monstrous proportions.

In a nutshell, the series is a mash-up of your favorite fairy tale characters and horror’s most notorious monsters. It starts very small-scale with a familiar scene: seven dwarfs watch as a prince kisses Snow White to wake her from her cursed slumber. She wakes up, but she doesn’t wake up right. 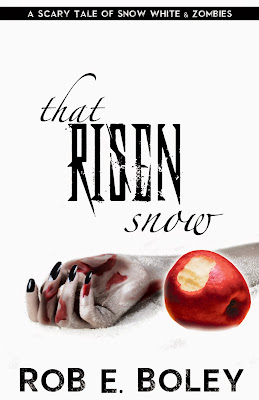 Snow is now a deranged zombie. She bites the prince and the dwarf leader Bones. That leaves the young dwarf Grouchy—who has a mad crush on Snow—to try to find a cure for her zombie curse while fighting off her ever-growing horde of zombies.

As the books progress, everything gets more epic. We go from a rural setting to a village to a city. The curse has a life of its own and it conjures more twisted and dangerous monsters. And of course, new character mash-ups are introduced, such as a werewolf Red Riding Hood and a mummy Goldilocks.

Sounds so cool! How did the idea of the story come to you?

It’s totally my daughter Anna’s fault. When she first started watching movies, her first obsession was Disney’s Snow White. We watched it over and over again, the way that kids do.

I remember lying on the couch one evening watching that prince kiss Snow and thinking, “Well, that’s a lame curse. Wouldn’t it be all the better if that kiss just acted as a catalyst so that the curse entered a second viral outbreak stage?”

Once I started writing, the characters totally took over. The great thing about fairy tales is that they have such iconic character with rich symbolism. It’s a fun playground to be writing upon.

I’m mostly a pantser. A couple years ago, I had the good fortune of attending Jeffrey Ford’s afternoon fiction seminar at the Antioch Writers’ Workshop. I completely agree with his take on outlining: that if you overplan your story, then it’s dead on arrival. Your characters don’t get a chance to surprise you, and that’s totally my favorite part of writing: when my characters surprise me. And they do it often!

However, especially for novels, I do usually have a rough ending in mind. I have no idea how I’m getting there, but I know approximately the destination. For a short story, I’m happy to start with a solid premise and see where it takes me.

Actually, for me, the hard part is not writing. I love to write.

Sure, it takes effort, but there’s not really one aspect of the act itself that’s particularly hard. New ideas are always coming to me. Writing them down in story form is a joy. Editing used to be a bothersome task, but as I’ve grown as a writer, I’ve come to love the act of wordsmithing and tightening up a manuscript.

I write 1,000 to 2,000 words a day, and I’ve found that to be a very achievable goal. The hard part is when life intervenes and gets in the way of writing, but I’m pretty adamant about it. I even write on holidays and vacations. If I don’t write, I get anxious. It keeps me happy and relaxed!

Shoes. I cannot and will not write barefoot.

Beyond that, coffee is usually a necessity. I mostly write in the morning, so I always have my Batman coffee mug on hand. In the evenings, I have a drink, too, tea or bourbon or maybe a glass of water.

LOL. Okay. I can honestly say I've written more while in socks than I have in shoes, but to each their own. ;) If you could have any super power, what would it be?

Well, my favorite super hero is Batman, so I guess I’d want the super power of vast personal wealth and extreme stubbornness.

But barring that, it’d be cool to have Aquaman’s deep sea powers. To be able to breathe underwater and swim to the ocean’s deepest depths, that would be utterly amazing. There’s a whole other world down there, and we know so little about it. Plus, he can talk to the fish and whales, so I’d love to know what’s on their minds.

I mean, wow, just in the course of writing The Scary Tales series, I’m constantly googling horrible stuff related to injuries and diseases and corpses. Thankfully, the Internet has no shortage of terrible images and descriptions.

It seems like I’m constantly googling for details about pirate ships.

…playing a game with my daughter. I love games. A lot of my childhood memories are of playing board games and card games. So, I try to play often with my daughter. Games are great for keeping your mind sharp and playful. They’re a nice way to relax and have fun without just staring at a screen.

One of our favorites right now is called Loonacy, a very simple yet enduringly fun card game by Looney Labs. We play it most every day. Also, my daughter has to do math practice each week, and we usually accomplish that by playing our own version of math dice. We just roll five dice (a 20-sided, a 4-sided, two 6-sided, and a 12-sided) and then come up with equations using all the numbers. Fun stuff!

Well, I have to give props to the Antioch Writers’ Workshop. Without that fine event, I wouldn’t have a writing career. Most especially, I have to thank the trio of fiction faculty members who have given me great guidance: Katrina Kittle, Les Edgerton, and Jeffrey Ford. In fact, it was Les who connected me with StoneGate Ink, publisher of The Scary Tales. And speaking of StoneGate, I have to thank Aaron Patterson and Kate Copsey at StoneGate for all that they’ve done for me. Some other fantastic authors and editors have been kind enough to support my writing in various ways: Jerry Gordon, Lawrence C. Connolly, Brady Allen, Neil Baker, and Linda Gerber.

My oldest friend, Frank Smith, is a trusted and wise reader. He always finds a way to make a story better. My co-parent, Cynthia Marshall, is also an astute and thoughtful reader. Finally, my daughter gets props for being patient with me when I have to write just 100 more words and for providing boundless inspiration.

Thanks for stopping by the blog!

Thanks so much for having me! I really appreciate it!


Like the sound of THE SCARY TALES? Then try THAT RISEN SNOW, now on sale for free on the following sites: