Interview With Julie Reece, Author of The Artisans

Today we are so happy to join the book tour for pub sister Julie Reece's THE ARTISANS! Julie has graciously stopped by to answer a few of our questions, but first, here's a tidbit about the book. Be sure to enter the giveaway at the end of this post.

They say death can be beautiful. But after the death of her mother, seventeen-year-old Raven
Weathersby gives up her dream of becoming a fashion designer, barely surviving life in the South Carolina lowlands. 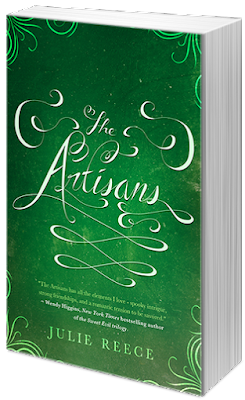 To make ends meet, Raven works after school as a seamstress creating stunning works of fashion that often rival the great names of the day.

Instead of making things easier on the high school senior, her stepdad's drinking leads to a run in with the highly reclusive heir to the Maddox family fortune, Gideon Maddox.

But Raven's stepdad's drying out and in no condition to attend the meeting with Maddox. So Raven volunteers to take his place and offers to repay the debt in order to keep the only father she's ever known out of jail, or worse.

Gideon Maddox agrees, outlining an outrageous demand: Raven must live in his home for a year while she designs for Maddox Industries' clothing line, signing over her creative rights.

Her handsome young captor is arrogant and infuriating to the nth degree, and Raven can't imagine working for him, let alone sharing the same space for more than five minutes.

But nothing is ever as it seems. Is Gideon Maddox the monster the world believes him to be? And can he stand to let the young seamstress see him as he really is?

Hi Julie! Welcome to We Do Write. Tell us a bit about yourself.

Hi you guys!! I’m so happy and grateful to be here today, so first, squee and XOXOX for having me.
I live in Atlanta. I enjoy being a southern girl but love hearing about everybody else’s culture, and story, and history. I adore all things YA. I’m a big animal person. I’m sort of artsy and do some drawing and painting. Oh, and I eat stupid amounts of chocolate. Let’s keep the priorities straight.

How did the idea for THE ARTISANS come to you?

Oddly enough, this story began as the Grimm fairy-tale The Elves and the Shoemaker. I know, go figure, right? But slowly, the story took on a mind of its own and morphed into something else. I swear I always do this when I write—start going a certain direction with the plot and then ... nope. I gave the poor tailor in the story a daughter (which isn’t original in the Grimm version), and then the daughter sacrificed herself to save her father from a terrible situation. Boom! It was obvious Beauty and the Beast was the stronger vibe in the manuscript. Though, I try and warn readers that it’s a very loose retelling, because it’s both fairy-tales mixed together while still being very much its own story, too.  Are you confused yet? Lol. Sorry.

Fairy-tale mash-up? Yes please! Sounds amazing! Are you a plotter or a pantser?

I’m a total panster who secretly wishes she were organized enough to be a plotter ... and never will be.

Focus!!!  I’m an ADD, dyslexic, abstract-random individual and that makes me a slow writer. I usually have too many story ideas hitting my brain at one time. I’m learning to embrace my personal brand of crazy, which is the best thing I’ve ever done. It’s okay to be different and to think differently. I wish I’d known that when I was sixteen! Better late than never. : )

I don't know a writer who isn't at least a little bit crazy, so welcome to the madhouse. What do you absolutely have to have nearby when writing?

This is slightly horrifying, and I hope you’ll still respect me after I tell you the awful truth ... I typically drink at least three, 32oz Styrofoam cups of McDonald’s unsweet tea (three lemons a piece) a day while I’m writing. THEN, I tend to chew Dentine Fire gum, so I don’t clench my teeth while I concentrate on the story—which is probably a direct result of all the hyped-up energy the caffeine gives me. Sad but true.

No judgement at all. What are you reading right now?

I just cracked the cover on Courtney Alameda’s Shutter. I will probably be extremely scared very soon.

Ooooh, I love this question. Also, it’s basically impossible to answer because I’m a greedy wench, and I want ALL the power. Which might make me Loki, but anyway ... if you’re going to be so mean about it and make me pick only one power, I’d want to be, like, Aquaman. Why you ask? I’m so glad you did. I love animals more than movies, so I’d like to talk to them, and have them be my friends and help me trap evil bad guys. If we can make a new superpower where Aquaman is actually Aquagirl (cause, you know, I like being a girl) that’d be awesome. And I’d like him to move onto land, too, so I can A.) Make friends with tigers and, B.) Not have to live in the ocean, which might be a bummer after a while. Of course, the name Aquagirl would no longer make sense but there you have it.

No. Aquagirl wouldn't work. How about Faunagirl?
What's the weirdest thing you've googled?

Geeze, you had to ask that, didn’t you? I’m seriously on the fence about just lying, but I won’t. We have horses. Once, I Googled how to clean my gelding’s ‘privates’ because, well, there were certain horsey-parts that needed a good washing. After Googling how to do it, I paid the vet. #truestory. Also, I can’t believe I just told you that!

Hey, somebody's gotta do it. Finish this sentence: If I'm not writing, I'm probably ...

Watching a movie. I am an unapologetic movie fanatic. Seriously. Fan. A. Tic. If you talk in the theater anywhere near where I’m sitting—especially if it’s a movie made from a YA novel—I will throw popcorn at your head and tell you to shush.

We MUST go to the movies together. It would be like a popcorn hurricane up in there.

Allow me to say a special thanks to Dorothy, Beth, Sandra and Paula for having me here today ... and for being awesome. I’m so grateful to everyone at Month9Books for helping bring The Artisans to the page. This has been the coolest journey. My writing buddies, Sisterhood of the Travelling Pens told me to write the novel I wanted to read and couldn’t find. So I did.

I really hope you enjoy the story.

Born in Ohio, I lived next to my grandfather’s horse farm until the fourth grade. Summers were about riding, fishing and make-believe, while winter brought sledding and ice-skating on frozen ponds. Most of life was magical, but not all. 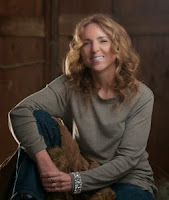 I struggled with multiple learning disabilities, did not excel in school. I spent much of my time looking out windows and daydreaming. In the fourth grade (with the help of one very nice teacher) I fought dyslexia for my right to read, like a prince fights a dragon in order to free the princess locked in a tower, and I won.

Afterwards, I read like a fiend. I invented stories where I could be the princess… or a gifted heroine from another world who kicked bad guy butt to win the heart of a charismatic hero. Who wouldn’t want to be a part of that? Later, I moved to Florida where I continued to fantasize about superpowers and monsters, fabricating stories (my mother called it lying) and sharing them with my friends.
Then I thought I’d write one down…

Hooked, I’ve been writing ever since. I write historical, contemporary, urban fantasy, adventure, and young adult romances. I love strong heroines, sweeping tales of mystery and epic adventure… which must include a really hot guy. My writing is proof you can work hard to overcome any obstacle. Don’t give up. I say, if you write, write on!