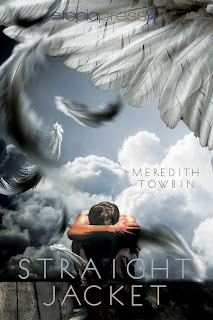 Eighteen-year-old Anna has lived her whole life in shame, losing herself in books to cope with crippling panic attacks triggered by her abusive parents. Forced into a psychiatric hospital, she can’t imagine a future that’s anything but bleak—until she meets Caleb, a gifted, 19-year-old artist who insists he’s an angel.

He swears his mission is to help Anna break free from her parents’ control and fulfill a destiny that she can only dream of. The doctors, however, are convinced that Caleb is delusional.

Anna doesn’t want to be that girl who’s in love with the crazy guy, but when she sees his stunning portraits of her and the way he risks everything to keep her safe, she can’t help but imagine a new future for both of them, filled with hope. But just when it seems they’ve created heaven on earth, Caleb’s past emerges full force, threatening to destroy their tiny, blissful world. And Anna has to decide if she should follow her heart, or if Caleb’s really as troubled as his doctors say…

Check it out!
Amazon
Barnes and Noble
Posted by Dorothy Dreyer at 7:22 am
Email ThisBlogThis!Share to TwitterShare to FacebookShare to Pinterest
Labels: angels, Meredith Towbin, Straight Jacket, YA Paranormal

Sounds amazing! How come I can't find it on Goodreads?

Katrina, Etopia Press may not have added it on Goodreads yet. Not sure if all presses go that route. It does sound like a great story, right?