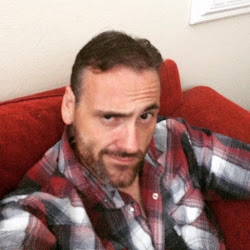 Today, we are pleased to have Mat Nastos, author of THE CESTUS CONCERN, here to discuss his novel.

Welcome to We Do Write, Mat. Tell us a bit about yourself.


People know me for one of three reasons - either as artist for the cult-classic independent comic book, ElfQuest, back in the 90s, or as one of the guys who writes those really awful B-movies for places like the SyFy Channel or Cinemax, or, if someone has kids, as a writer who has worked on Phineas & Ferb at the Disney Channel.
In other words, I'm a professional nerd.
Well, I guess I fall into the someone-with-kids category. My kids and I love Phineas & Ferb! It's such a smart and well written show. You seem to have a lot of experience in the industry. How long have you been writing?
Professionally, I've been writing for about 15 years. I started out writing comic books and then moved to film. From there it was into television for the Disney Channel and now prose. I was lucky enough to have a strong grounding in storytelling from my work as a comic book and storyboard artist. That training, and having worked with hundreds of scripts from other writers, helped me more than anything else.
What a fun way to get started. I imagine your journey has been very helpful in your writing career.
So, tell us a bit about THE CESTUS CONCERN. 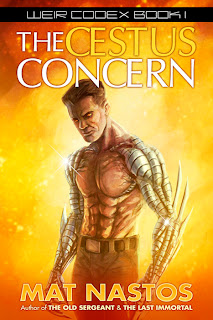 The story is about a US Army Ranger who is shot down while on a mission in Iraq and comes to with a year missing from his life. It's a hardcore action/sci-fi story about a man on the run from a government who wants information that is locked away in his head. I've been describing it as "Johnny Mnemonic meets Wolverine."
That sounds seriously cool!  How did you come up with the story?
I am a completely unabashed, unrestrained, and unapologetic fan of action flicks. I love every shape and every variation of them - the iconic 80s actioneers, hardcore Asian action, crappy 70s Chinese martial arts, Blaxploitation, Hong Kong action cinema, and everything in between.

I love action.
With my first full-length novel, THE CESTUS CONCERN, I wrote what I like to think of as my love-letter to my favorite action films. It was everything I ever wanted to read in an action/adventure/sci-fi novel. After writing so many films with low budgets, it's great to be able to sit down and write something with an unlimited one.
I totally get the love affair with action. I was raised with those 70's Chinese Martial Arts movies playing in the background while I played with my ninja Barbies. I can even do a mean English-voice-over impersonation.
Do you have a critique group/partner or beta readers, or do you self-edit?
I have a few beta readers that I trust and I work with a couple of different editors once things get closer to being finished. It's always good to have another set of eyes check out your work before it is released out into the wild - there's nothing worse than being called out on the Internet for crappy work!
Too true! So, plotter or pantser?

I'm definitely a plotter. I always start with a synopsis to solidify the story idea for myself, then go to an excessively detailed outline (20-30 pages for a screenplay and 10,000 words for a novel) before getting in to the "real" writing. It's all about making sure I have a strong foundation when I start.
As a full-blown pantser, I'm always impressed by those who plot. It must make writing so much easier to have it all figured out before you start. What’s the hardest part of writing for you?
Getting over that hump in the middle - that point where you're in the center of the ocean and can't see a shore on either side. Inevitably, getting from the halfway point to the last quarter of every story kills me, regardless of its length. It happens to me with short stories, movie screenplays and novels.
What do you absolutely have to have nearby when writing?
My Star Wars Slurpee cup and my phone. I've decided along the way that checking my email or Twitter while I'm writing doesn't count as slacking off as long as I'm doing it on my phone.
Ha! I think I need to adopt that philosophy! And learn how to tweet with one hand and write with the other.
If you could have any super power, what would it be?
Well, I've already got the super power of dance...aside from that, I'm a flight guy. The idea of soaring through the air is pretty intriguing.

What's the weirdest thing you've googled?
I'm going to refrain from answering that for fear it might damage any hope at a future political career. :D

Oh, darn! Well, how about you finish this sentence: If I'm not writing, I'm probably ...
...Googling something really weird and highly inappropriate.

Here’s the part where you thank the people who are supporting you. Let's hear your shout outs.
The biggest shout out goes to my wife, Athena, and my kids who put up with a crazy guy who spends way too much time sitting at his desk working. Beyond that, my best friends (Marc, Alden and Jimmy Jay) who are supportive beyond what I deserve, and my editor, Arlene Taylor, for polishing things up very nicely.

And finally, where can people find you and your book online?
THE CESTUS CONCERN is available at in print and e-formats at Amazon, Barnes & Noble, Smashwords, Kobo, Drivethrufiction.com and a few other places. I am all over the Internet and easy to find.

He is a fraud and Disney is being made aware of his actions at Comic conventions.