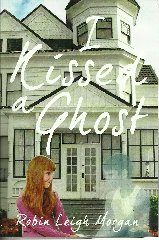 Today we're pleased to welcome author Robin Leigh Morgan who's here to talk about her book, I KISSED A GHOST. Robin is a retired New York City civil servant who is married and has two cats.

Welcome to We Do Write, Robin. How long have you been writing?


I wrote close to 500 items can best be described as commentaries for a community newspaper from 1995 until 2006 which had been done without any pay. This is basically where I learned how to write.  However, becoming an author I now had to learn how to write fiction, with its own set of rules on how it should be done. The transition itself has been a fascinating and interesting experience from that of writing non-fiction.

Tell us about I KISSED A GHOST. What’s the story about?

Mary gets a new classmate named Jonathan who’s a great baseball player and to get on the team, he needs Mary’s help to improve his grades. Six months later when she learns she’s moving, she decides to give him something special--a first kiss.

Moving into her new home she soon discovers it has a ghost named George, her age, who takes her on numerous trips to the past of a hundred years ago. As she meets children her own age, everyone teases her about her house being haunted, but no one will go inside.
Mary likes his help doing her math homework, writing her reports, and taking her back in time. George and Mary’s interaction grows and she eventually gives him a quick peck on his lips while they’re in the past, which is the only place George is a real boy, for having done something special for her.

In an attempt to get her classmates/friends to be willing to come inside her house, she has a Halloween party designed to confuse them as to what is real and what is not.

Can Mary kiss George a second time, at the special date and time he needs to be kissed? What happens afterwards if she does? The answers are all in the book!
How did the idea of the story come to you?

To tell the truth the whole story has been one of pure imagination, as I wrote it, I saw different ways of letting the story develop, and chose one which I felt could be built upon. In the beginning I did have a skeleton of an outline for the storyline and nothing more.

How did you come up with the title for your book?

Selecting a title for a book had been a very challenging experience for me; but after racking my brain over it, I decided to merely summarize the premise for the entire story in as few words as possible until I had something which could be used as the title for my book. Hence, since the story is about a girl [Mary] and her kissing the ghost [George] she had living in her house, the story had to be called, “I Kissed a Ghost.”

I don’t have any critique group/partner, etc. And even though I had re-read my manuscript several times and made edits along the way. I still had someone else to the actual editing; after which I did a few more re-reads, concentrating and tweaking the manuscript for different categories of items.

I’d probably say a little of both. As I said in the above, I made a skeleton of an outside, writing down the basic plot points I’d like to hit as the story unfolded; and as a sculptor starting with a wire base of what they’d like to have, I added material, then took some away, until I had the finished product I had in mind.

Is overcoming the dreaded writer’s block, which all authors/writers come down with from time to time, of not being able to write next; and I also find it hard not to be overly descriptive of scenes, the excess of which had to be deleted in one of my re-reads.

Like many authors I know some background music to help muffle other outside noises.

As far as my writing is concerned it would have to be the ability to type 20 pages in an hour. This way I could type a FULL LENGTH novel in two days.

One of them would definitely have to be to find out what a “Spotted Dick” is.

Quick writing test! Use the following words in a sentence: kissed, sensory, and reptile.

The scent of prey kissed the wind, alerting the sensory organs of the reptile of its presence.  [and I  wrote this sentence without changing the order of the words you gave me.]

would be going crazy trying something else to do. [One thing about being retired…you don’t really want to find another job, even if it’s only part time; but you must find something to occupy all the free time you now have.]

THANKS to all of my followers on the blogs I’ve got for their feedback [both posted and private] regarding my blog entries as well as the UNEDITED SNIPPETS I’d posted from my then uncompleted manuscript as I travel on my maiden journey to become the author I am today.

I also can be found on


Posted by Dorothy Dreyer at 7:25 am
Email ThisBlogThis!Share to TwitterShare to FacebookShare to Pinterest
Labels: first kiss romance, I Kissed a Ghost, Robin Leigh Morgan, time travel, YA Paranormal

Writing a novel in 2 days would be an awesome super power. The title on this grabbed my attention right away. Thanks for sharing :)

@ T Drecker
Viele Danke !!!
If the title has grabbed your attention, I'd like you to read the UNEDITED SNIPPETS I mentioned about in the interview to see some of the things I wrote about in the book.

Great interview. Being able to type that fast would be awesone. I think I would live the ability to write without errors and typos...yup, that would be my power. People will call me Extraordinary Ey.
By the way, what is a 'spotted dick?'

@ Ey
According to Wikipedia a "Spotted Dick" is a steamed suet pudding, popular in Britain and Canada, containing dried fruit (usually currants or raisins) commonly served with custard. Spotted refers to the dried fruit (which resemble spots) and dick may be a contraction or corruption of the word pudding (from the last syllable) or possibly a corruption of the word dough[1] or dog, as "spotted dog" is another name for the same dish with the use of plums rather than currants. Another explanation offered for the word "dick" is that is the German word for "thick."

Micki Peluso is the author of "And the Whippoorwill Sang" said...

This is a great interview and very informative. I read "I Kissed a Ghost" and highly enjoyed it. It tells a story of preteen love between a young girl and a preteen ghost, and has time travel---making it an interesting, delightful story.

Micki - THANKS for stopping by and visiting me here in my interview and leaving your wonderful comment.

I believe knowledge is power, and I feel my answers here has provided the information from which Dorothy's wonderful followers and learn more about me and the other authors she has or will interview. Knowledge which might cause the reader's here to consider buying a copy of the books of the authors they've read the interviews for.

What is a pantster? Never heard this term before. I did enjoy the interview,

That's a good question. To it simply a pantser is a person who writes by the seat of their pants. They just write, write, write.

As I said in my interview, I'm a combination of a plotter [someone who plots out all the details before writing anything], and a pantser [I just plot out the main points of my storyline.]